You want to do everything possible to save your tooth instead of needing to have it removed, so a root canal procedure is used as a last resort to help you keep your tooth. The nerve supply of your tooth is known as the pulp and sometimes it can become infected through decay, or even if your tooth has suffered from an injury. If you don’t get the problem sorted out once the pulp has been infected you could end up with an abscess and a lot of pain.

Why A Root Canal Procedure Is So Important

Try to imagine the nerve inside your tooth is dead due to the decay that has eaten away at your teeth or the injury you’ve suffered from. Now imagine all the bacteria passing through your mouth on a daily basis that will eventually discover the dead nerve and automatically latch onto it as a food source. The nerve in your tooth is dead and no blood will be able to reach the problem area, so the bacteria will fester away. It’s eventually going to form an abscess and the bacteria will start spilling out of your tooth, but even though your body should be able to fight off some of the infection it’s got no way of getting to the root of the cause. You’ll be in terrible pain by this point, so the only solution is for your Dentist to perform a root canal procedure, which is to essentially clean out the wound and close your tooth up so nothing else can get inside.

What happens in a root canal procedure? 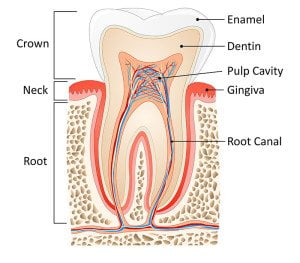 The first stage is going to be the most discomforting, but don’t believe everything you hear because you’ll be given a local anaesthetic which will numb your mouth and you shouldn’t feel any pain. Your Dentist will usually use rubber dam isolation around the tooth keep it as dry as possible to reduce the risk of introducing bacteria into the nerve of the tooth. Even though you may have a hole in your tooth it might not be large, so your dentist will have to drill into your tooth to gain access to the pup. If you’ve had a filling before you will know you’ll feel a grinding sensation in your mouth, but if for some reason you’ve never had a filling before you should know this grinding sensation from the drill is nothing to worry about. After your tooth has been opened up your Dentist will clean out all the bacteria from your tooth and disinfect all the canals to make sure nothing is hiding away anywhere. At Boctor Dental Smilecentre we use the highest standards and root canal technologies to determine root lengths and prepare you tooth canals with as little discomfort as possible. You’ll then get a temporary medicated dressing and a temporary filling to keep your tooth clean until the second stage. Be aware that following this stage, your tooth could flair up and cause a bit of pain for up to a week. This is because it has been aggravated, but it is normal and not everyone experiences this.

2 – Closing Up Your Tooth

The second stage of a root canal procedure usually happens two weeks after the first stage. Your Dentist waits this time period to let the tooth settle and let any infection disappear. The second stage involves filling the tooth – both the lower roots and the upper tooth (called the crown). The canal portion of your tooth will be filled with a rubbery substance called gutta-percha and your Dentist will need to keep pushing these pieces of gutta-percha into your canals until they are completely full. You won’t want to have any gaps left otherwise it could lead to problems further down the line if you end up with another hole in your tooth. For the crown section of your tooth the dentist will simply give you a regular filling to close the tooth up completely.

Now You Can Relax

A root canal procedure might not be the nicest experience in the world, but once infection reaches the nerve of your tooth it will have to be performed to save your tooth. The good thing is that the modern technology we use at Boctor Dental Smilecentre makes the procedure much more bearable than in past days and once the tooth is numbed it’s no worse than a filling. The only thing you need to be aware of following your root canal treatment is that the tooth is now more brittle than previously as the nerve has been removed and there is less moisture. Also, it has been filled completely through its centre and core – think of it as a donut. The resulting weakness can mean that it could crack or chip away at some point so you will need to consider getting a dental crown to fully encapsulate and protect your tooth. Your Dentist will discuss this with you prior to starting the root canal procedure. For any further information regarding pain in your tooth or our root canal procedure, call us today: