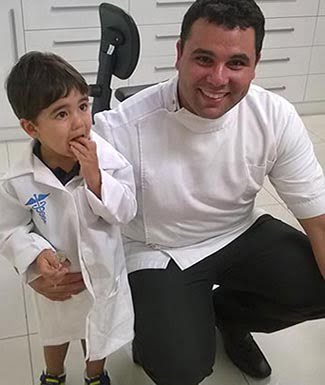 Dr Raymond Boctor is one of our founding Principal Dentists at Boctor Dental Smilecentre, with 17 years’ experience in General and Cosmetic Dentistry and more than 8 years experience in orthodontic dentistry.

If you have been looking for a great dentist to do quality and affordable braces for yourself or your child, you have got to book in to see Dr Ray now.

Dr Boctor is a Gold Coast local now, living here since 1992 when he was 12. After settling in Clear Island Waters, Dr Raymond Boctor commenced his high school education at Merrimac State High School in Mermaid Waters and was a school leader in the graduating class of 1995. He then followed in his older brother’s (Dr Victor Boctor) footsteps and began his tertiary studies in Dentistry at the University of Queensland, in St Lucia, Brisbane. In 2000, he graduated with a Bachelor of Dental Sciences, with Honours.

He and his brother have been the Principal Dentists at Boctor Dental Smilecentre since 2001. Raymond enjoys undergoing further education and decided to study Law at Griffith University’s Southport Campus in 2006, graduating in 2008 with a Bachelor of Laws, with Honours. There he met his wife, Johanne (fellow law student) and they married in 2008. In 2009, Dr Raymond Boctor and his brother Dr Victor Boctor commenced training in orthodontics with Progressive Orthodontics.

Although he enjoys all aspects of general dentistry, he particularly enjoys orthodontics and braces. According to Dr Raymond Boctor, “to be able to give my braces patients a perfect smile and so much extra confidence is an amazing skill to have, and is very rewarding”. With over six years industry experience in applying braces and orthodontics, and over 200 successful cases, Dr Raymond Boctor is Boctor Dental Smilecentre’s expert in braces.

He and wife Johanne have four beautiful children… two boys (Micah and Jonah) and a two girls (Elianah and Emiliah). They also have two beagles (Patches and Peanut) and a cat (Mittens). He loves having the kids visit him at work and getting them excited about Dentistry. He enjoys spending his spare time with his family and when he has the chance, enjoys going camping or travelling with his family.

To book an appointment with Dr Raymond Boctor to have a chat about Braces, Orthodontic Dentistry or General Dental concerns, call one of our Boctor Dental Smilecentre locations today: